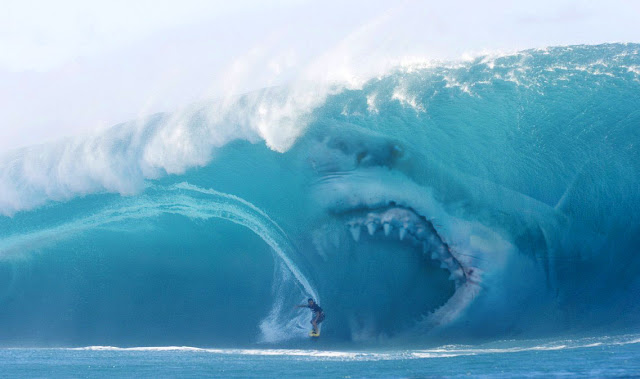 Growth Hacking has emerged as the hottest trend in marketing since the term was coined by Sean Ellis in 2010. It is used to describe many things but the definition I prefer is Exploiting shortcuts to growth, at the intersection of marketing and technology, on the edge of ethics. {f}

Twenty years ago, if your product was on the front page of PC Magazine, you could buy a Lambo. But new media is too fragmented to deliver that kind of marketing punch. Growth Hacking is the new way to achieve ubiquity. Get it right and you can buy a spaceship to Mars, literally.  TweetMe

Megalodon means "big tooth" in Greek. It is the name given to a species of giant sharks that lived millions of years ago. {f}  This article reviews some of the biggest Growth Hacking success stories to date. Each one, a Megalodon that munched its way to the top of the food chain.

Facebook surpassed 1 billion daily logins for the first time on August 24th, 2015. That's quite an accomplishment for a company that started only 9 years ago. A lot of things contributed to that success but one underrated element is the Login API.

Almost every mobile or web app on the planet offers a Facebook login. The number of times the Facebook login button appears is measured in the Billions, per day.  To understand the value, let's calculate how much it would cost Facebook to buy that kind of exposure.

According to TheSearchMonitor, CPC rates across different industries, adjusting for seasonality is about a buck a click. So if Facebook is serving up 10 Billion a day, that's a $3.65 Trillion a year hack. Ok, so I'm exaggerating... we should be using CPMs instead of cost-per-click and it's not really advertising because you don't end up on Facebook. Let's just say it's worth a scheisse-load.

Facebook has gained a lot more than ad impressions through the login API. It was a key differentiator that allowed it to power ahead of MySpace and Friendster. Most importantly, it embedded Facebook in the fabric of the Internet, insuring it's ubiquity for a long time to come.

We take the Facebook login for granted, but the ethical implications of sharing personal information are colossal. To get developers to use their login, Facebook gave away the names of their users' friends. And yet, it's still the place where people post pictures of their kids, unless Notabli has their way.
Slack - Intrinsic Virality

Slack bills itself as "Team Communication for the 21st Century". It attempts to free users from the tyranny of the inbox while providing a knowledge base composed of historical group chat.

When it launched in February 2014, Slack had about 15,000 daily active users. One year later, daily actives ballooned to 500,000 {f}. More importantly, users were highly engaged, sending over 300 million messages a month. In October 2014, Slack raised money from Silicon Valley royalty, valuing the company at over a billion dollars. Zero to $1B in 14 months, that's faster than a Tesla!

The insight that makes Slack so successful is that team communication creates a valuable knowledge base over time. But Slack didn't fit neatly into an product category at the onset. So just before launch, CEO Stewart Butterfield sent a memo to emphasize that a great product was not enough, "our job is also to understand what people think they want and then translate the value of Slack into their terms". {f}

According to Butterfield, the first growth strategy the company implemented was "begging and cajoling friends at other companies" to try Slack. That feedback allowed the team to perfect the user interface before unleashing a growth tsunami.

Slack used two primary growth hacks, or Slhacks as they have become known.

Intrinsic virality is the first. To get any value from Slack, you have to share it with friends. It does a great job solving team communication problems so people naturally share it with other groups, and so on, and so on...

Slack reduces the barriers to adoption by making most features free and only charging for searchable archives and a few other premium features. A freemium business model and frictionless on-boarding have allowed Slack to spread like wildfire.

Remember Holliday Inn and VRBO? Well your kids won't. In just a few years, Brian Chesky and Joe Gebbia have built Airbnb into a powerhouse for short term rentals, valued at over 25 Billion dollars. {f}

Airbnb usually tops the list of growth hacks for their Craiglist integration. The founders hired a former roomate, Nathan Blecharczyk as the first engineer. At the beginning of 2010, the team developed a way for users to publish their properties simultaneously on Craigslist with just 1-click. They pitched the feature to users by email, promising an average increase in monthly revenue of $500 per property.

The combination of Airbnb's guest management features and the reach of Craigslist proved to be a winning combination, but that's not the whole story...

According to Dave Gooden, Airbnb poached Craigslist users using questionable methods. Dave worked in the vacation rental industry and was intrigued by Airbnb's mysterious growth. They didn't have the tell tale signs of success like great SEO rankings or social media presence so Dave became suspicious.

Dave created a test to verify his theory. He posted properties to Craiglist and checked off the box for anonymous email, "do not contact with special offers". Within a few hours he received an email encouraging him to check out Airbnb. He conducted further tests and concluded that Airbnb was using black hat techniques to obtain Craigslist user information. But that's not the whole story either.

Brian Chesky and Job Gebbia are designers by trade and hustlers by nature. They created cereal boxes featuring Obama and McCain during the 2008 election netting them $30,000 to get started. {f}

Their eye for the visual led them to realize that properties with quality photos were much more successful. For the New York launch, they hired professionals to photograph the best properties and conversions went through the roof.

A lot of people assume that the Google Search Engine is the main source of Alphabet's revenue. But search wouldn't generate a cent without advertising and algorithms. In fact, search engines like Archie, Infoseek and Altavista were not very profitable businesses in the early days of the industry.

Excite was the first to start making substantial revenue by selling advertising and mixing it into the search results. This may have qualified as a bonafide sales hack but Excite got bonafied by the ethics committee. Users cried foul and Excite's reputation took a hit.

Google displayed ads at the top of search listings but labeled them clearly as such. They zoomed past Excite in a short time. No growth hack to this point, Google was still a mediocre growth story by Silicon Valley standards.

Google started experimenting with auctioning off ad inventory. Ebay had proven that auctions were a powerful sales tool but Google dialed it up a notch. They added some innovative algorithms and found themselves atop a revenue gusher.

Selling advertising to that point was mostly done by sales people calling on ad buyers. Once Google was sure of the math, they informed customers that the only way to buy ads would be through Adsense auctions. Customers threw a scheisse-fit but Google held firm.

Google made so much money from ad auctions that their biggest problem was hiding it until the IPO {f}.

Technically, Adsense is more of a sales hack more than a marketing hack, but the the main component is code and the result has been tremendous growth.

Travis Kalanick started Uber to be a "baller" {f}. The first version of the app allowed him to tap a button and have a black car pick him up minutes later. In San Francisco, that was geek gold at the turn of the decade. Five years later, Uber is valued at $50 Billion and rumored to be preparing a $100 Billion IPO. That's geek platinum in 2015.

What amazing growth hacking techniques did Kalanick use? Free rides. Taxis are scarce in San Francisco which really pisses off the Technorati so Kalanick sent towncars to pick them up. All they had to do was download his app and tap a button. Now they could all be ballers.

The problem Kalanick solved alleviated  such a pain point that Uber users lit up social media. Bloggers amplified the message. Word of mouth did the rest. As Kalanick explains, Uber spends virtually nothing on marketing to this day.

One of the only growth hacks used by Uber is the double-sided referral. Sign-up a friend and Uber will give you both a $20 credit on your next ride.

Double sided referrals have become a classic growth hack since Dropbox used them to join the Billion market cap club. There is little evidence that Uber used other sophisticated growth hacks. That's an important lesson to assimilate. Growth hacking can make you a star, but delivering amazing solutions to big problems is the surest path to $1B. TweetMe